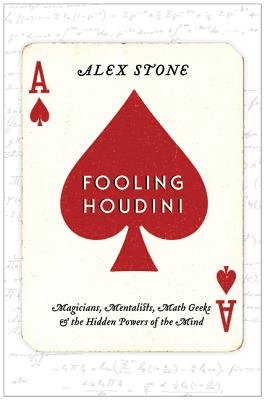 Stone, a writer, editor, physicist and - magician - reveals the hidden world of magic and magicians in this entertaining, provocative book. He writes about his training as a sleight-of-hand artist and also the impact of magic on psychology, math, neuroscience and physics. A terrific read! — Louise Jones

This engrossing book delves into the fascinating and secret (and sometimes silly) world of the professional magician, but really catches fire when it talks about the nature of perception and how these prestidigitators are able to pull the wool over our eyes by literally controlling our minds. — Erik Barnum

As he navigates this quirky and occasionally hilarious subculture populated by brilliant eccentrics, Stone pulls back the curtain on a community shrouded in secrecy, fueled by obsession and brilliance, and organized around one overriding need: to prove one’s worth by deceiving others.

But his journey is more than a tale of tricks, gigs, and geeks. By investing some of the lesser-known corners of psychology, neuroscience, physics, history, and even crime, all through the lens of trickery and illusion, Fooling Houdini arrives at a host of startling revelations about how the mind works--and why, sometimes, it doesn’t.

Alex Stone has written for The New York Times, The Wall Street Journal, Discover, Harper's, and The New Republic. He lives in New York City.

“An enthralling journey into the inner world of magic. Alex Stone writes with a winning voice that you’ll want to follow anywhere.”
— Joshua Foer, author of Moonwalking with Einstein

“Alex Stone’s Fooling Houdini is a delight. In the physics Ph.D program at Columbia, he drops everything to pursue the murky world of magic. He writes with wit and scientific sharpness and grand humor. He immerses us in a fascinating world few have ever entered.”
— Buzz Bissinger, author of Father's Day and Friday Night Lights

“What I loved most about Fooling Houdini is the world it takes us into: these huddled cliques of obsessed magicians reinventing their art. . . . This book makes you want to do magic tricks, and convinces you just how hard it is to do them well.”
— Ira Glass, host of "This American Life"

“Fooling Houdini is a totally smart and engrossing study of one of America’s most misunderstood sub-cultures, and at the same time the story of one man’s quest to probe the mysteries of magic, science, and where the two meet.”
— John Hodgman, author of The Areas of My Expertise

“Fooling Houdini is an eye-opening, irresistible journey into the world of magic. Stone has written a masterful story that is bursting with energy, inventiveness, and a sense of wonder on every page. I couldn’t put it down!”
— Steven Levitt, co-author of Freakonomics

“Part insider’s look at the high-stakes world of casinos and cardsharps, part scientific examination of deception, this page-turner gives an intriguing peek behind the magician’s curtain.”
— Discover

“A hilarious and illuminating memoir. . . . Less a how-to guide, and more about the bizarre-personalities, the infighting and the jaw-dropping dedication and dexterity required to be a truly great magician.”
— The New York Post

“A cheery, inquisitive book about a world where math, physics, cognitive science and pure geeky fanaticism intersect. . . . This book is more than a series of anecdotes. It’s an effort to explore the colorful subculture of magic devotees and the serious, theoretical basis for the tricks they do.”
— Janet Maslin, The New York Times

“The narrative is compelling because it comes veined with a very human question: What is truth? That may sound too philosophical for such a fun memoir, but when Stone invokes this question it comes across as pitch perfect.”
— The Boston Globe

“Fooling Houdini is not only informative, but highly entertaining. Stone has pulled the proverbial rabbit out of the hat.”
— USA Today

“I’ve always been intrigued by secret societies and artistic subcultures. Stone opens up the obsessive and hidden world of magicians with intelligence and sly humor.”
— Molly Ringwald, The New York Post

“An affable new book. . . . What differentiates Fooling Houdini is Stone’s determination to understand the science behind his craft.”
— The Daily Beast

“This book is clever and winning—and well written, too. In turning our attention away from the magic and towards the magicians, Stone has pulled off an excellent trick.”
— The Sunday Times (London)

“The book treats magic more as science than superstition, and here Stone’s point is well made. . . . As he shows us the limits of our logic, Stone’s enthusiasm rubs off.”
— The Financial Times

“A fascinating ramble around a subject that, Stone convincingly argues, raises all sorts of big questions about how our brains interpret the world.”
— Reader's Digest (UK)

“The funniest book I read all year.”
— Bob Schieffer