Who Is Mark Twain? (Paperback) 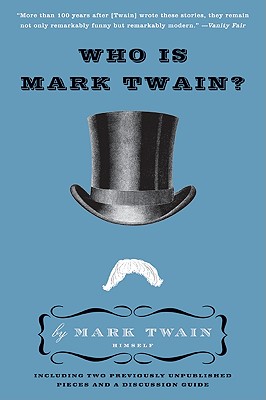 Hirst, general editor of the Mark Twain Project at the University of California, Berkeley, has selected 24 previously unpublished essays, stories and sketches by the American master. Witty, biting and as relevant today as when Twain wrote them. — Louise Jones

“More than 100 years after [Twain] wrote these stories, they remain not only remarkably funny but remarkably modern. . . . Ninety-nine years after his death, Twain still manages to get the last laugh.” — Vanity Fair

Who Is Mark Twain? is a collection of twenty six wickedly funny, thought-provoking essays by Samuel Langhorne Clemens—aka Mark Twain—none of which have ever been published before.

"You had better shove this in the stove," Mark Twain said at the top of an 1865 letter to his brother, "for I don't want any absurd ‘literary remains' and ‘unpublished letters of Mark Twain' published after I am planted." He was joking, of course. But when Mark Twain died in 1910, he left behind the largest collection of personal papers created by any nineteenth-century American author. Who Is Mark Twain? presents twenty-six wickedly funny, disarmingly relevant pieces by the American master—a man who was well ahead of his time.

Mark Twain, who was born Samuel L. Clemens in Missouri in 1835, wrote some of the most enduring works of literature in the English language, including The Adventures of Tom Sawyer and The Adventures of Huckleberry Finn. Personal Recollections of Joan of Arc was his last completed book—and, by his own estimate, his best. Its acquisition by Harper & Brothers allowed Twain to stave off bankruptcy. He died in 1910.

“Who Is Mark Twain? is a refreshing reintroduction to both [Twain’s] critical analytical thought and his playful sense of humor.”
— Los Angeles Times

“More than 100 years after [Twain] wrote these stories, they remain not only remarkably funny but remarkably modern….Ninety-nine years after his death, Twain still manages to get the last laugh.”
— Vanity Fair

“[Twain] was, in the phrase of his friend William Dean Howells, ‘the Lincoln of our literature’. . . . At the heart of his work lies that greatest of all American qualities: irreverence.”
— Washington Post

“As funny and insightful as any of [Twain’s] published and well-known works, these essays take on the federal government, religion, race, fame, and even the literary canon with a sharp-eyed clarity we can chuckle over as we read while feeling uncomfortable knowing that they feel all too contemporary.”
— Walter Mosley