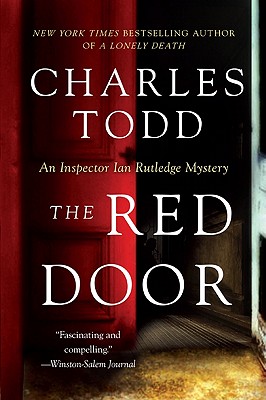 This is book number 12 in the Inspector Ian Rutledge Mysteries series.

One of the best in this excellent series of mysteries set in England just after WWI. A war-damaged Scotland Yard detective, Ian Rutledge, must connect the murder of a woman outside a rural village with a London family's secrets. — Louise Jones

“World War I affected not only those who served, but those who stayed at home. Inspector Ian Rutledge has returned from the war but has brought back his own horrors and guilt. Now, he is faced with two cases, which, he suspects, may be connected. Filled with unexpected twists and turns plus the personal angst of Rutledge himself, The Red Door is one more satisfying chapter in the life of Inspector Rutledge, his family, and cohorts.”
— Wendy Foster Leigh, The King's English, Salt Lake City, UT

“One of the best historical series being written today.”

“Fascinating and compelling.”
— Winston-Salem Journal on The Red Door

“One of the strongest entries yet in a series that shows no sign of losing steam….Once again Todd perfectly balances incisive portraits of all the characters, not just the complex and original lead.”
— Publishers Weekly (starred review) on The Red Door

“Engaging and atmospheric.”
— Library Journal on The Red Door

“A complex story with lots of unexpected twists and turns….A fun ride to a surprising conclusion.”
— Mystery Scene on The Red Door

“Superb…haunting tale of love and loss.”
— Globe and Mail (Toronto) on The Red Door

“In The Red Door, Charles Todd shows again that this series about Ian Rutledge, a battle-fatigued World War I veteran and Scotland Yard detective, is as fresh and original as when the shell-shocked detective debuted 12 novels ago.”
— Sun-Sentinel (Florida) on The Red Door

“An intriguing story that’s impossible to put down…reminiscent of Agatha Christie.”
— Post and Courier (Charleston, SC) on The Red Door

“The book is more than a whodunit. Todd’s characters are well-wrought, his settings evocative, and the book a pleasure to read.”
— World magazine on The Red Door