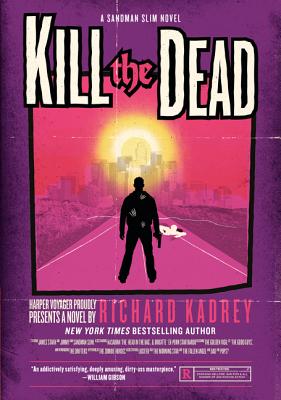 This is book number 2 in the Sandman Slim series.

The sequel to Sandman Slim. Slim must act as Lucifer's bodyguard while the Big Bad is in Los Angeles making a movie about his life. Violent, profane and wickedly funny. Not for the younger sci-fi reader. — Sarah Donner

“Sandman Slim is my kind of hero.”
—Kim Harrison

Sandman Slim is back from Hell. After wreaking unholy havoc in author Richard Kadrey’s resoundingly acclaimed Sandman Slim, the demon-slaying anti-hero and half-angel fugitive from the underworld returns in a brutally funny, eye-poppingly inventive, and totally addicting follow-up, Kill the Dead. If you’re a fan of Buffy and Jim Butcher, Christopher Moore, Neil Gaiman, and Warren Ellis, or you dig the dark urban fantasy vibe of Charlaine Harris, Kim Harrison, and Simon Green, you’ll cheer Lucifer’s onetime personal assassin as he signs on as his ex-boss’ Hollywood bodyguard…and takes on the zombie apocalypse almost single-handedly.

Richard Kadrey is the New York Times bestselling author of the Sandman Slim supernatural noir books. Sandman Slim was included in Amazon’s “100 Science Fiction & Fantasy Books to Read in a Lifetime,” and is in development as a feature film. Some of his other books include The Wrong Dead Guy, The Everything Box, Metrophage, and Butcher Bird. He also writes the Vertigo comic Lucifer.

“…endlessly inventive and high-octane…Kadrey’s an excellent writer who’s able to juggle all of it without dropping a single pin.”
— Locus

“Everything a sequel should be; that is, more. … There’s hardly a moment where you’re not chewing your fingernails to the wrist wondering what happens next. … Kadrey is a hell of a writer, versatile and seasoned, and these pulpy, dark, ultraviolent novels are his best work yet.”
— Cory Doctorow, Boing Boing

“What’s best displayed by Kill the Dead is Kadrey’s snappy prose. From the first lines...you know you’re in for a Chandler-meets-the-undead treat.”
— Locus

“Hilarious … belongs up there with Dresden Files and Felix Castor novels. … some of the best supernatural buddy comedy ever created. ... This is that rare sequel that’s actually better than the first book (which was plenty great) and manages to take several leaps forward.”
— io9.com