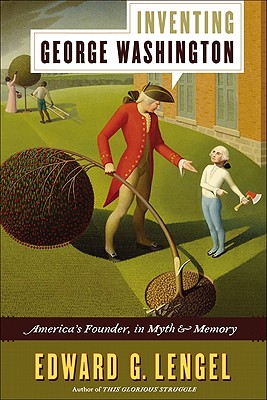 The next time you hear a politician, media talking head, or religious spokesperson quote Washington or describe something he did: be skeptical. Better yet, consult this little book to learn from a distinguished scholar the ways in which Americans have had a field day in distorting the truth for over two centuries...and why it will continue. — Bill Lewis

“Lengel’s Washington is the archetypal American soldier—an amateur citizen in arms who struggles to learn an unfamiliar and demanding craft on the job....Outstanding.” —Publishers Weekly (starred review) on The Glorious Struggle

Editor-in-Chief of the Washington Papers Project  Edward G. Lengel delivers an entertaining and erudite history of America's Founding Father. In Inventing George Washington, a captivating counterpart to Lengel’s General George Washington: A Military Life, the historian looks at Washington’s life and writings, at the creation of his mythos, and at what his legacy means for our nation and ourselves.

Edward G. LengeL is editor in chief of the Papers of George Washington and a professor at the University of Virginia. He is the author of several books, including General George Washington and This Glorious Struggle. A lecturer on Washington and the Revolutionary War, Lengel is also a historical consultant, advising on such works as the History Channel's own comprehensive documentary. He is a frequent radio and television guest—appearing on C-SPAN, CBS, and NPR, among others—and is a regular contributor to newspapers and magazines in the vein of military history and American heritage. He lives with his family in Charlottesville, Virginia.