The Outsider: A Memoir (Hardcover) 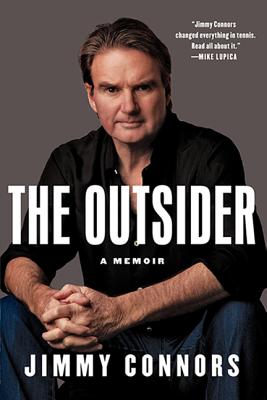 The Outsider is a no-holds-barred memoir by the original bad boy of tennis, Jimmy Connors.

Connors ignited the tennis boom in the 1970s with his aggressive style of play, turning his matches with John McEnroe, Bjorn Borg, and Ivan Lendl into prizefights. But it was his prolonged dedication to his craft that won him the public’s adoration. He capped off one of the most remarkable runs in tennis history at the age of 39 when he reached the semifinals of the 1991 U.S. Open, competing against players half his age.

More than just the story of a tennis champion, The Outsider is the uncensored account of Connors' life, from his complicated relationship with his formidable mother and his storybook romance with tennis legend Chris Evert, to his battles with gambling and fidelity that threatened to derail his career and his long-lasting marriage to Playboy playmate Patti McGuire.

When he retired from tennis twenty years ago, Connors all but disappeared from public view. In The Outsider, he is back at the top of his game, and as feisty, outspoken, and defiant as ever.

This autobiography includes original color photographs from the author.

Jimmy Connors won a record 109 men's singles titles (and fifteen doubles titles) from 1972 to 1989. He was ranked the world's number-one player for five consecutive years and won a total of ten Grand Slams. In 1998 he was inducted into the International Tennis Hall of Fame, and he is arguably one of the top tennis players of all time. Originally from East St. Louis, he lives in Santa Barbara, California, with his family.