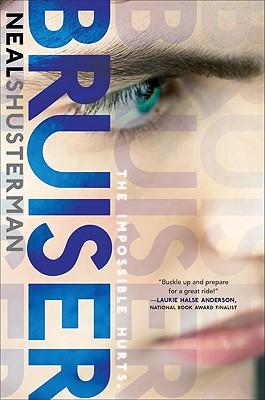 “All isn't well before Tennyson and his twin sister, Bronte, meet Bruiser, the kid the school voted 'most likely to get the death penalty.' But then things change. Their troubles disappear, or at least they believe they have, until they discover that Bruiser has an ability no one should know about. A haunting story that blurs the lines between fault and innocence.”
— Dave Richardson, The Blue Marble, Fort Thomas, KY

The New York Times bestselling author of Challenger Deep, Neal Shusterman, delivers a suspenseful, eloquent, and thrilling novel that you won't be able to stop thinking about after you've put it down.

Tennyson is not surprised, really, when his family begins to fall apart, or when his twin sister, Brontë, starts dating the misunderstood bully, Brewster (or The Bruiser, as the entire high school calls him). Tennyson is determined to get to the bottom of The Bruiser's reputation, even if it means gearing up for a fight. Brontë, on the other hand, thinks there's something special underneath that tough exterior. And she's right…but neither she nor Tennyson is prepared for the truth of what lies below the surface.

Told through Tennyson, Brontë, and Bruiser's points of view, this dark, twisting novel explores friendship, family, and the sacrifices we make for the people we love.

Neal Shusterman is a New York Times bestselling and award-winning author. He is the author of Challenger Deep, a National Book Award winner, Boston Globe–Horn Book Award Honor Book, and recipient of six starred reviews; Bruiser, which was a Cooperative Children's Book Center (CCBC) Choice, a YALSA Popular Paperbacks for Young Adults pick, and on twelve state lists; and the Unwind dystology (includiung Thunder Head and Scythe), among many other books. He lives in California with his family.

“The compelling issues and engaging premise make this a rewarding read.”
— ALA Booklist

“This is a wrenching but ultimately redemptive look at how pain defines us and how love, whether familial, romantic or friendly, demands sacrifice and brings gifts of its own. Once again, Shusterman spins a fantastic tale that sheds light on everyday life.”
— Kirkus Reviews

“This eloquent and thoughtful story will most certainly leave its mark.”
— Bulletin of the Center for Children’s Books

“Even as the narrative wrestles with philosophical and moral issues, it delves deep into the viewpoints of Tennyson, Bronte, Bruiser, and his younger brother, each segment told in a different, distinctive style, making for a memorable story.”
— Publishers Weekly

“Shusterman’s writing is wonderful and a joy to read. The subject matter makes this a great book discussion choice.”
— Voice of Youth Advocates (VOYA)

“Shusterman’s novel reveals its secrets and their implications slowly, allowing readers to connect the dots before the characters do and encouraging them to weigh the price of Bruiser’s ‘gift’ against the freedom from pain that Tennyson and Bronte enjoy.”
— School Library Journal