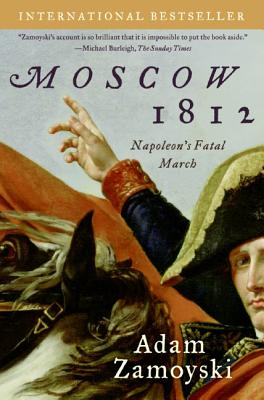 The best military history writing never forgets that even colossal campaigns are collective stories of individual people in extraordinary situations. This superb example is nearly impossible to put down. — Bill Lewis

Napoleon dominated nearly all of Europe by 1810, largely succeeding in his aim to reign over the civilized world. But Britain eluded him. To conquer the island nation, he needed Russia's Tsar Alexander's help. The Tsar refused, and Napoleon vowed to teach him a lesson by intimidation and force. The ensuing invasion of Russia, during the frigid winter of 1812, would mark the beginning of the end of Napoleon's empire. Although his army captured Moscow after a brutal march deep into hostile territory, it was a hollow victory for the demoralized troops. Napoleon's men were eventually turned back, and their defeat was a momentous turning point in world affairs. Dramatic, insightful, and enormously absorbing, Moscow 1812 is a masterful work of history.

Adam Zamoyski was born in New York and educated at Oxford. He is the author of Moscow 1812. He lives in London.

“Adam Zamoyski’s account of the 1812 campaign is so brilliant that it is impossible to put the book aside.”
— Michael Burleigh, The Sunday Times

“A harrowing account. ... Utterly admirable. It combines clarity of thought and prose with a strong narrative drive.”
— Antony Beevor, The Daily Telegraph

“Told with vigor, sweep, and insight, Moscow 1812 brings this epic moment to life in a thoroughly fascinating way.”
— Jay Winik, author of April 1865

“Hundreds of books have been written about Napoleon’s invasion of Russia. Moscow 1812 is perhaps the best.”
— John Lukacs, author of Five Days in London

“Powerful. . . . Brilliant. Zamoyski’s exposition of the 1812 campaign is a model of elegant clarity.”
— T.J. Binyon, The Sunday Telegraph