More Mirth of a Nation: The Best Contemporary Humor (Paperback) 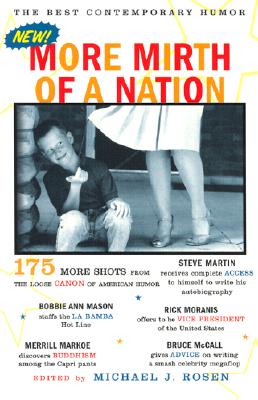 Witty, wise, and just plain wonderful, the inaugural volume of this biennial, Mirth of a Nation, ensured a place for the best contemporary humor writing in the country. And with this second treasury, Michael J. Rosen has once again assembled a triumphant salute to one of America's greatest assets: its sense of humor. More than five dozen acclaimed authors showcase their hilariously inventive works, including Paul Rudnick, Henry Alford, Susan McCarthy, Media Person Lewis Grossberger, Ian Frazier, Richard Bausch, Amy Krouse Rosenthal, Nell Scovell, Andy Borowitz, and Ben Greenman -- just to mention a handful so that the other contributors can justify their feelings that the world slights them.

But there's more! More Mirth of a Nation includes scads of Unnatural Histories from Randy Cohen, Will Durst's "Top Top-100 Lists" (including the top 100 colors, foods, and body parts), and three unabridged (albeit rather short) chapbooks:

David Bader's "How to Meditate Faster" (Enlightenment for those who keep asking, "Are we done yet?")

Matt Neuman's "49 Simple Things You Can Do to Save the Earth" (for instance, "Make your own honey" and "Share your shower.")

Francis Heaney's "Holy Tango of Poetry" (which answers the question, "What if poets wrote poems whose titles were anagrams of their names, i.e., 'Toilets,' by T. S. Eliot?")

And there's still more: "The Periodic Table of Rejected Elements," meaningless fables, Van Gogh's Etch A Sketch drawings, a Zagat's survey of existence, an international baby-naming encyclopedia, Aristotle's long-lost treatise "On Baseball," and an unhealthy selection of letters from Dr. Science's mailbag. And that's just for starters! Just remember, as one reviewer wrote of the first volume, "Don't drink milk while reading."

Michael J. Rosen was among those involved in the very first days of Thurber House and he continued to serve as its literary director for twenty years. Michael is the author of some 150 other books—poetry, young-adult novels, anthologies, picture books, cookbooks—for readers of all ages. Most recently, he has published James Thurber's Collected Fables, as well as a hefty monograph, A Mile and a Half of Lines: The Art of James Thurber, that coincides with an exhibition at the Columbus Museum of Art that he’s curated in honor of the Year of Thurber (2019).  He’s also an editor, ceramic artist, illustrator, and companion animal to a cattle dog named Chant.