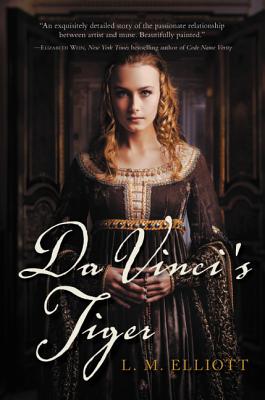 A fascinating look at the art world and political climate in Renaissance Florence. Inspired by Da Vinci’s first portrait, this work of fiction is nevertheless filled with historical accuracies and fully captures the aristocratic circles of the time period from the point of view of his young muse.

For fans of rich and vivid historical novels like Girl with a Pearl Earring and Code Name Verity, Laura Malone Elliott delivers the stunning tale of real-life Renaissance woman Ginevra de' Benci, the inspiration for one of Leonardo da Vinci's earliest masterpieces.

The young and beautiful daughter of a wealthy family, Ginevra longs to share her poetry and participate in the artistic ferment of Renaissance Florence but is trapped in an arranged marriage in a society dictated by men.

The arrival of the charismatic Venetian ambassador, Bernardo Bembo, introduces Ginevra to a dazzling circle of patrons, artists, and philosophers. Bembo chooses Ginevra as his Platonic muse and commissions a portrait of her by a young Leonardo da Vinci.

Posing for the brilliant painter inspires an intimate connection between them, one Ginevra only begins to understand.

In a rich and vivid world of exquisite art with a dangerous underbelly of deadly political feuds, Ginevra faces many challenges to discover her voice and artistic companionship—and to find love.

L. M. Elliott is the New York Times bestselling author of Da Vinci’s Tiger; Under a War-Torn Sky; A Troubled Peace; Across a War-Tossed Sea; Annie, Between the States; Give Me Liberty; Flying South; and Hamilton and Peggy! She lives in Virginia with her family. You can visit her online at www.lmelliott.com.

An exquisitely detailed story of the passionate relationship between artist and muse, whose spirited yet gentle Renaissance heroine put me in awe of just how far women have had to come in 500 years. Beautifully painted. — Elizabeth Wein, Michael L. Printz Honor winner and New York Times bestselling author of Code Name Verity

“Elliott’s novel is thoroughly researched, portraying three-dimensional characters in a lively atmosphere of love and art. Renaissance Florence breathes through this book, bringing readers to a fuller understanding of the portrait, the era, and an indomitable young woman.” — Publishers Weekly (starred review)

“Elliott meticulously researched the 15th century to bring alive the affluence, art, and clothing Florence was known for. In many ways, this intriguing novel is a feminist piece. Add this gem to round-out collections skewed toward 20th century history.” — School Library Journal