Nicholas Ray: The Glorious Failure of an American Director (Paperback) 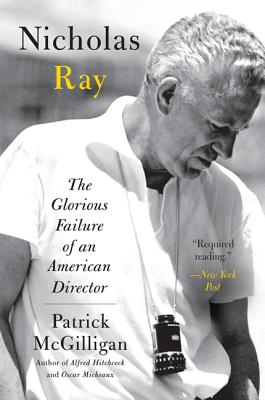 Student of Frank Lloyd Wright, friend of both Woody Guthrie AND Howard Hughes, director of some of the best films ever made (Rebel Without a Cause, anyone?) -- but Ray died a lonely ruin of a man. This revealing biography gets under the skin of one of Hollywood's most complicated personalities. — Charles Bottomley

Patrick McGilligan is the author of Alfred Hitchcock: A Life in Darkness and Light; Fritz Lang: The Nature of the Beast; and George Cukor: A Double Life; and books on the lives of directors Nicholas Ray, Robert Altman, and Oscar Micheaux, and actors James Cagney, Jack Nicholson, and Clint Eastwood. He also edited the acclaimed five-volume Backstory series of interviews with Hollywood screenwriters and (with Paul Buhle), the definitive Tender Comrades: A Backstory of the Hollywood Blacklist. He lives in Milwaukee, Wisconsin, not far from Kenosha, where Orson Welles was born.

“[A] portrait of a filmmaker who managed over time to upstage the movies that made him celebrated.”
— Milwaukee Journal-Sentinel

“A clear and balanced portrait of a most complex man.”
— Kirkus Reviews (starred review)

“[A] fascinating, formidable account of a director whose life was as fraught with complications and melodrama as were his movies.…Meticulously researched and gratifying, a biographical page-turner.”
— Library Journal (starred review)

“McGilligan limns the tragic trajectory of Ray’s career with insight and compassion.”
— Booklist