Passions and Tempers: A History of the Humours (Paperback) 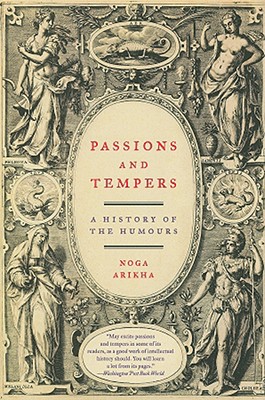 “Passions and Tempers may excite passions and tempers in some of its readers, as a good work of intellectual history should. You will learn a lot from its pages.”

The humours—blood, phlegm, black bile, and choler—were substances thought to circulate within the body and determine a person’s health, mood, and character. The theory of humours remained an inexact but powerful tool for centuries, surviving scientific changes and offering clarity to physicians.

This one-of-a-kind book follows the fate of these variable and invisible fluids from their Western origin in ancient Greece to their present-day versions. It traces their persistence from medical guidebooks of the past to current health fads, from the testimonies of medical doctors to the theories of scientists, physicians, and philosophers. By intertwining the histories of medicine, science, psychology, and philosophy, Noga Arikha revisits and revises how we think about all aspects of our physical, mental, and emotional selves.

Noga Arikha was raised in Paris and received her doctorate in history at London's Warburg Institute. She was a fellow at the Italian Academy for Advanced Studies at Columbia University, and has taught at Bard College and the Bard Graduate Center. She lives in New York City.

“Passions and Tempers may excite the passions and tempers...as a good work of intellectual history should.” — Washington Post

“...a stimulating work that shows the Western mind nobly grappling with the inscrutable nature of the human body.” — Publishers Weekly

“Fascinating…[Passions and Tempers] challenges us to consider the value, and the meaning, of a discredited theory.” — Salon.com