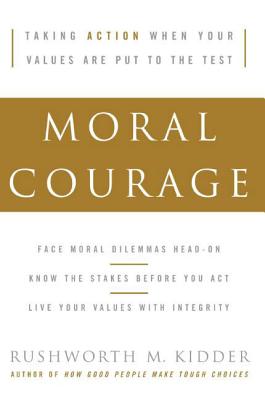 Why did a group of teenagers watch a friend die instead of putting their own reputations at risk? Why did a top White House official decide to come clean and accept a prison sentence during Watergate? Why did a finance executive turn down millions out of respect for her employer? Why are some willing to risk their futures to uphold principles? What gives us the strength to stand up for what we believe?

As these questions suggest, the topic of moral courage is front and center in today's culture. Enron, Arthur Andersen, the U.S. Olympic Committee, abusive priests, cheating students, domestic violence -- all these remind us that taking ethical stands should be a higher priority in our culture. Why, when people discern wrongdoing, are they sometimes unready, unable, or unwilling to act?

In a book rich with examples, Rushworth Kidder reveals that moral courage is the bridge between talking ethics and doing ethics. Defining it as a readiness to endure danger for the sake of principle, he explains that the courage to act is found at the intersection of three elements: action based on core values, awareness of the risks, and a willingness to endure necessary hardship. By exploring how moral courage spurs us to strive for core values, he demonstrates the benefits of ethical action to the individual and to society -- and the severe consequences that can result from remaining morally dormant.

Moral Courage puts indispensable concepts and tools into our hands, equipping us to respond to the increasingly complicated moral challenges we face at work, at home, and in our communities. It enables us to make clear, confident decisions by exploring some litmus-test questions:

While physical courage may no longer be a necessary survival skill or an essential rite of passage out of childhood, few would dispute the growing need for moral courage as the true gauge of maturity. Treating this subject not as an esoteric branch of philosophy but as a practical necessity for modern life, Kidder deftly leads us to a clear understanding of what moral courage is, what it does, and how to get it.

Rushworth M. Kidder was a professor of English at Wichita State University for ten years before becoming an award-winning columnist and editor at the Christian Science Monitor. The author of ten books on subjects ranging from international ethics to the global future, he won the 1980 Explicator Literary Foundation Award for his book on the poetry of E.E. cummings. He and his wife, Elizabeth, live in Lincolnville, Maine.

“Rush Kidder brilliantly deals with the perilous pathways where moral courage is absolutely required.” — --David M. Abshire, president of the Center for the Study of the Presidency, former U.S. Ambassador to NATO, and cofounder of the Center for Strategic and International Studies

This book, like one candle in the darkness, belongs in every place of learning-and every library. — Library Journal (starred review*)