19 Varieties of Gazelle: Poems of the Middle East (Paperback) 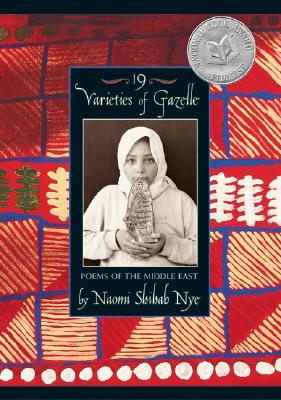 A 2002 National Book Awards Finalist, 19 Varieties of Gazelle is a delight collection of poems for young adults. Poems about the Middle East, peace, and being an Arab-American in the United States, are though provoking and insightful. Each poem shows the beauty of Nye's world. We also learn that the world has more similarities than differences. Enjoy learning about the world of the Middle East, what it means to be Arab-American and poems of peace. — Jeanette

Fowzi, who beats everyone at dominoes; Ibtisam, who wanted to be a doctor; Abu Mahmoud, who knows every eggplant and peach in his West Bank garden; mysterious Uncle Mohammed, who moved to the mountain; a girl in a red sweater dangling a book bag; children in velvet dresses who haunt the candy bowl at the party; Baba Kamalyari, age 71; Mr. Dajani and his swans; Sitti Khadra, who never lost her peace inside.

Maybe they have something to tell us.

Naomi Shihab Nye has been writing about being Arab-American, about Jerusalem, about the West Bank, about family all her life. These new and collected poems of the Middle East -- sixty in all -- appear together here for the first time.

Naomi Shihab Nye is a poet and anthologist and the acclaimed author of Habibi: A Novel and Sitti's Secrets, a picture book, which was based on her own experiences visiting her beloved Sitti in Palestine. Her book 19 Varieties of Gazelle: Poems of the Middle East was a finalist for the National Book Award. She has taught writing and worked in schools all over the world, including in Muscat, Oman. She lives in San Antonio, Texas.