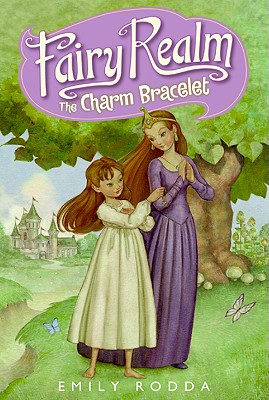 This is the first installment of the Fairy Realm series.While visiting her beloved grandmother, Jessie finds there are many secrets that will change not only Jessie, but her grandmother as well, especially if she cannot solve the largest secret of all--why is her grandmother so very ill? Magical horses, elves, fairies and more grace the pages of Rodda's series. — Jeanette

When Jessie visits her grandmother's house, Blue Moon, she discovers an amazing secret, and enters the Fairy Realm for the first time. All kinds of magical beings live in the Realm, and a noble Queen in a great golden palace rules them all.

But the Realm is in danger, and Jessie must outwit an evil enemy to save it before it's destroyed forever!

“An intriguing plot and appealing characters make this a sure choice for budding fantasy fans.”
— Publishers Weekly