The Face in the Mirror: How We Know Who We Are (Paperback) 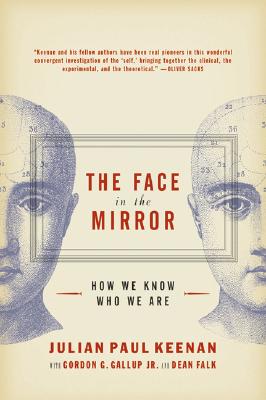 We've all witnessed this moment: a dog, a cat, or another animal reacting to its own reflection in the mirror, treating it as another animal to be played with or confronted. As human beings, we take self-recognition for granted, but this seemingly simple ability represents one of the most complex mysteries of neuroscience. The Face in the Mirror takes readers on a lively tour of the neurological, anthropological, and psychological roots of self-recognition -- from the intricate network in the brain that enables higher primates to recognize their image to complex, self-related emotions such as humor, embarrassment, and jealousy that play a crucial role in our evolution and survival. From animals who share our ability for self-recognition to case studies of patients who no longer recognize who they are, the authors examine some of the latest evidence on a subject that has puzzled philosophers and scientists for millennia -- how do we know who we are?

A Harvard-trained neurologist, Julian Paul Keenan is currently an assistant professor in psychology and the director of the Cognitive Neuroimaging Laboratory at Montclair State University and a researcher at the New York State Psychiatric Institute, Columbia University. He was previously on the faculty of Harvard Medical School. He lives with his wife, Ilene, in Jersey City, New Jersey.

Gordon G. Gallup Jr. is a senior professor of psychology at SUNY-Albany, who researches evolution and behavior among humans, primates, and other animals. His groundbreaking "mirror test" helped reconceptualize recent studies in self-awareness and consciousness.

Dean Falk is a senior anthropologist at Florida State University in Tallahassee, Florida. Her work has focused especially on gender differences and the origins of language and music in the brain. She is well known for her "radiator hypothesis," which explains how humans keep their extra-large brains cool.

This engaging book…will delight readers curious about the mind and the scientists who study it.” — Publishers Weekly

“Fascinating … Keenan’s writing is breezy and conversational, and the book is exciting and fun to read.” — San Diego Union-Tribune