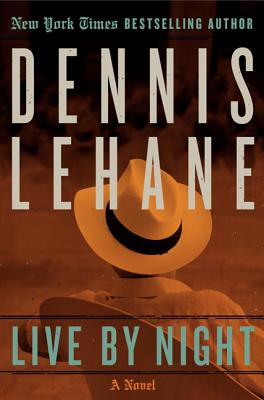 This is book number 1 in the Joe Coughlin Series series.

What a fun read! Lehane has written a great gangster novel. Taking a character out of Given Day and sending him off to Florida during prohibition leads to a visceral, energetic and engrossing novel of crime, passion, betrayal and booze. Lehane is a master. — Chris Morrow

If William Kennedy were Raymond Chandler’s editor, the result might resemble Dennis Lehane’s latest and most wonderful novel, Live by Night. Set twenty years after Lehane's epic novel, The Given Day, this literary masterstroke is much more than the story of a small time gangster’s rise during Prohibition. It is a dark, stylistic tour de force for the author. Lehane cavalierly dances a razor's edge, evoking pulp fiction without ever lapsing into it and working his literary legerdemain to elevate this tale to truly classic status. What a ride! — Erik Barnum

“This is a stunning epic of a young Irish gangster coming up in the vicious underworld of the Prohibition era who carries the loaded pedigree of being the son of the Boston police chief. Knocked off his game by his first great love, he falls prey to the Italian mob boss who makes him his own and then punishes him for his success. From Charlestown to Tampa to Havana, this stay-up-all-night page-turner is rich in both history and suspense.”
— Elizabeth Houghton Barden, Big Hat Books, Indianapolis, IN

From New York Times bestselling author Dennis Lehane comes this epic, unflinching tale of the making and unmaking of a gangster in the Prohibition Era of the Roaring Twenties—now a Warner Bros. movie starring Ben Affleck, Elle Fanning, Zoe Saldana, and Sienna Miller.

Meticulously researched and artfully told, Live by Night is the riveting story of one man’s rise from Boston petty thief to the Gulf Coast’s most successful rum runner, and it proves again that the accolades New York Times bestseller Lehane consistently receives are well deserved. He is indeed, “a master” (Philadelphia Inquirer) whose “true literary forefathers include John Steinbeck as well as Raymond Chandler” (Baltimore Sun). And, “Boy, does he know how to write” (Elmore Leonard).

Dennis Lehane is the author of thirteen novels—including the New York Times bestsellers Live by Night; Moonlight Mile; Gone, Baby, Gone; Mystic River; Shutter Island; and The Given Day—as well as Coronado, a collection of short stories and a play. He grew up in Boston, MA and now lives in California with his family.

“Lehane’s novel carves its own unique place in the Prohibition landscape. . . . This is an utterly magnetic novel on every level, a reimagining of the great themes of popular fiction—crime, family, passion, betrayal—set against an exquisitely rendered historical backdrop.”
— Booklist (starred review)

“LIVE BY NIGHT transcends the familiar and assumes an unimpeachable reality of its own. . . . [A] meticulously crafted portrait of our violent national past.”
— Washington Post Book World

“LIVE BY NIGHT is Crime Noir 101, as taught by the best of its current practitioners. . . . A sentence-by-sentence pleasure. You are in the hands of an expert. And you’ll know it.”
— Janet Maslin, New York Times