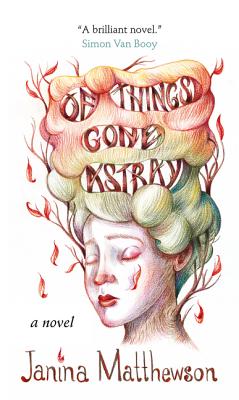 A real gem of a novel that is every bit beautiful as the cover and very difficult to put down. Each character has lost something important; a lover, their office building, a wall, sense of direction, piano keys. A little boy named Jake is able to forge a connection with lost objects, but, unbeknownst to him, is also losing his most precious connection. The magic of Matthewson's debut is so multi-faceted, so original, and so engaging it's a breath of fresh air for the fiction world. Very highly recommended!

In London, a group of people have lost that which they hold most dear. A girl stands in the airport waiting for her lover while her feet turn to roots and her skin to bark. A recluse loses the front wall of her home, while a workaholic cannot find his office building. Piano keys, a sense of direction, and a boy's relationship with his father all have gone astray. Slowly, each victim adapts, unwittingly helping one another during the briefest encounters. Each loss is heartbreaking and each character's struggle to survive is inspiring. With stunning prose and insight, Matthewson uses magic to illuminate truth in this hauntingly beautiful debut novel. — Amelia Stymacks

Here is a quirky and fantastical novel about things lost and things found from a startling new voice in fiction.

On a seemingly normal morning in London, a group of people all lose something dear to them, something dear but peculiar: the front of their house, their piano keys, their sense of direction, their place of work.

Meanwhile, Jake, a young boy whose father brings him to London following his mother's sudden death, finds himself strangely attracted to other people's lost things. But little does he realize that his most valuable possession, his relationship with his father, is slipping away from him.

Of Things Gone Astray is a magical fable about modern life and values and finding the things that really matter.

Janina Matthewson is a writer and trained actress from Christchurch, New Zealand. She now lives in London. Of Things Gone Astray is her first full-length novel.