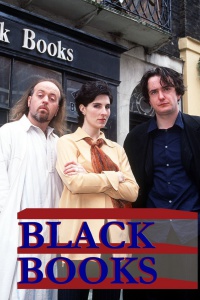 Many years ago, I sat on the futon of my very first apartment with my fiance (now wife) as one of her coworkers, Heather, fired up the DVD player and inserted a disc that would forever change the way I view comedy: Black Books.

Heather had talked up this British comedy series for months. The year was 2005 and up to that point the only British comedy television I had seen consisted of Keeping up Appearances, Monty Python’s Flying Circus and The Young Ones, the latter being a show a college roommate had found funny, and I never did. None of these productions could prepare me for the comic rompings and rantings of Bernard Black, Manny Bianco and Fran Katzenjammer.

Bernard is the proprietor of Black Books, a bookshop in London. Manny, his assistant, and Fran, a friend and fellow shop owner, add a softer, more sane counterpoint to Bernard’s brooding, booze-fueled tirades. It is these tirades that showcase the comic talent of Dylan Moran, the actor who portrays Bernard. His mannerisms, quirky facial expressions and turn of phrase (much of the writing is by Moran) work beautifully with Bernard’s character. Not only is it clear that Moran truly enjoys playing Bernard but one gets the impression that he really is something of a misanthrope in real life too, albeit one with a terrific sense of humour. Moran’s Irish accent only adds to charater’s appeal.

The humour is broad, ranging from high brow jokes involving classic literature to crude references about bodily functions, although the latter are done tastefully. Much of the setups involve Bernards and Mannys interactions with customers, something anyone who has worked in retail will appreciate more deeply than those who have not.

I think what struck me most about Black Books is that it is clever and doesn’t cater to the lowest common denominator. If you enjoy humour that revolves around excrement and contrived setups involving characters exhibiting simple, odd behaviors, Black Books is not for you. I doubt Moran and the others involved in creating and producing the show expected it to become mainstream and in fact it did not. It has, however, developed a cult following that will not be going away anytime soon. With only three seasons produced between 2000 and 2004 the only thing not to like is that more episodes weren’t made, though it is available on DVD and other formats. It has even been known to surface on Netflix from time to time.

So if you should encounter Black Books, stop what you’re doing and watch. You won’t be disappointed.