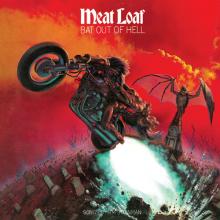 $21.98
SKU: 0194397331011
Vinyl LP pressing. Bat Out of Hell is the debut studio album by rock icon Meat Loaf, as well as his first collaboration with composer Jim Steinman and producer Todd Rundgren. The album was released on October 21, 1977. It's musical style is influenced by Steinman's appreciation of Richard Wagner, Phil Spector, Bruce Springsteen and The Who. Bat Out of Hell is one of the best-selling albums of all time, having sold over 43 million copies worldwide. Regarded as one of the most influential rock albums of all time, Bat Out of Hell's songs have remained classic rock staples. Rolling Stone ranked it at number 343 on it's list of the 500 Greatest Albums of All Time.Store Subject: CLASSIC ROCK
Release Date: 4/24/2020